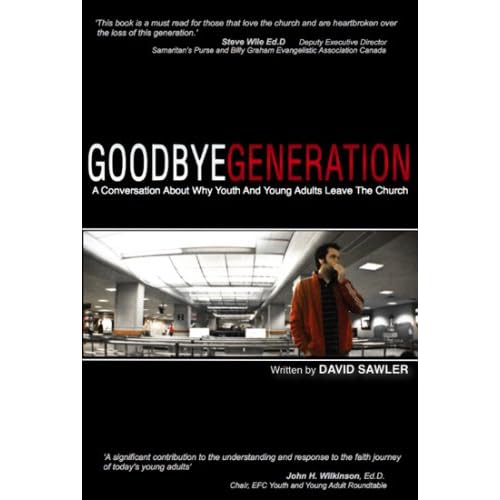 This is going to have to be one of the last books I read on “dropoutism” in the north American church today. By now I’ve read 4 or 5, though it feels like more than that.

I chose to read this one because it’s a Canadian perspective on the matter, and I wanted to see what was different than, say “Unchristian” which had a lot of American stats and things that didn’t translate particularly well into Canada (like the church being overly politically affiliated). Also, Sid Koop (who has an office across from mine) had this book on his shelves, so I figured borrowing is always better than buying!

David Sawler is a guy who’s been working with youth for a while and has lived in Southern Ontario and now works in the Maritimes. For some reason the fact that he was from the Maritimes scared be a bit – from what I’ve seen from playing in churches coast to coast, church culture in Eastern Canada is significantly different from that of Ontario, the prairies or western Canada.

A lof of what this book says is similar to what the other books say, but with what I thought was slightly more of a personal flair. The chapters talk about honesty and transparency which is lacking in many communities and is greatly needed to keep young adults in the church – although I think that’s just part of keeping a church alive and isn’t at all specific to young people. Lack of discipleship and intergenerational connections is mentioned as well.. something I’m trying to work on here at Efree Lethbridge, though relationship is something that just can’t be programmed. That’s another post. The struggles with the extreme “lunatics” and how we as “normal” people relate to them is a good one for a Canadian book. In most cases “fundamentalist” is a word that isn’t used much in Canada. We’re nice and we usually are somewhere up the middle on most things. That being said, people are better connected and communicated to these days, so what do we do as Christians when we’re compared to those who we don’t agree with? He goes on – more interactive services and ways of living out one’s faith are needed in churches, as well as a more of a “missional” focus. These are my words.

Right in the middle of his book is my favorite part, a chapter titled “Is Something Wrong With My Bible”. This is a point which I think this book explains better than anything else I’ve read yet. It talks about how young adults struggle with parts of theology and their bible, and how they don’t have any way to ask their questions and get answers that are workable for them. I like this because I think it’s true – I think many people have over-simplified young adults and the problem of dropoutism and chalked it up as psychological and sociological and cultural, but not theological. I think it’s more theological that many people want to let it be. Young adults want to be able to ask questions like why a loving God who sent a savior to redeem all who would accept him have his people, the Israelites, kill innocent women and children. How is that just? Great question.. and our churches need to be less afraid to ask them and journey through them together (because most of those questions have journeys, not answers). I think this point gives dignity and respect to young adults, and from what I’ve seen and read, it’s needed. Many people today don’t throw away their faith because of a few hypocrites, they’re smarter than that.

All said and done, I’d give this book a 6.5 out of 10 I think. A few really well written paragraphs, one really thought provoking chapter, and a bunch of stuff that everyone else is saying in one way or another. Unfortunately I felt the Canadian content of this book in a way that I wish I hadn’t… it just seemed a bit amateur. The writing was decent, but the formatting and graphics weren’t great. There were more mistakes in spacing and other things (including a repeated paragraph) that it just was bothersome. I’m pretty big on aesthetics, and I know the church in Canada isn’t as good at presentation as American churches (it’s a culture/population density thing I think), but this book was a bit disappointing. I really wanted to like it and hoped that it would be fantastically insightful, but as something who works with (and is a) young adult(s), it wasn’t anything groundbreaking.

I do, however, think that David Sawler has his heart in the right place, and I imagine he’ll get better at this in time. I’m trying to keep track of his website as he’s a “leader” and “expert” in this area (whatever that means)… so check it out if you’re interested! Goodbye Generation Website